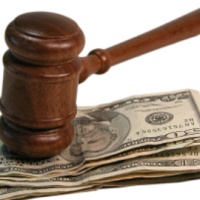 A very fitting ending to my week might have been an explosion that swallowed my entire section of gridlock in rush hour – nowhere to escape to – no matter if you use your blinker, or not; another fitting scenario just as easily could’ve been something along the lines of having my limbs tied to four horses that were subsequently giddy-upped four different directions; or I maybe should have ended up asleep in some dirty crackhead’s tunnel inside of that horrid “sculpture” thing that I spent several days of last week staring at from a cush hotel balcony…that would have sucked.
The ten days leading up to yesterday seem like a dreamscape to me now, somehow – in a surreal and foggy kind of way; the entirety of the emotional expenditure on my part has left me drained, and sensing a question mark floating above my head when I try to think too hard about why that is. I have decided to let it roll off my back for now – all of it; it’s too diabolical and dramatic for me to wrap my head around, anyway. All that I know for sure is that I have lost my focus lately, despite my progress in therapy and my expanding comfortable environments (good sign!), it is suddenly clear to me that I have been quite “functionally” dissociated and detached throughout.
It’s the final “other shoe” that needs to be dropped before I can possibly breathe again like I used to. The tension and anxiety that are attached to Boo’s upcoming 18th birthday and release into a distant community, on her own and without any preparation or real world social skills – well…the underlying dread and fear have rendered me bassackwards on pretty much a daily basis for so long now that it has come to feel “normal”, almost acceptable on some days. But in truth, this ongoing stress factor for me has done a good job at riding me hard; and these days, I guess it’s time to try like Hell to put me away soaking wet.
The darkness that my life has gradually resigned to, as a result of the past six years of Living Hell in a Waking Nightmare that is directly attributed to, as well as executed by – the local courts and government funded agencies – remains as a hue that my words cannot possibly describe with any justice or worthy depiction; the needle went off the vinyl so many years ago and there has been only the hideous, brain-aching sound of the resultant scratching ever since. The professionals charged with protecting my child have collectively gang-raped me (metaphorically speaking) in succession for over six years – legally, and without shame. They have broken my pockets through repeatedly relocating my Boo further and further away in distance, and then denying me the agreed upon (prior to any of the relocations, of course) financial assistance with the lodging/traveling expenses required to maintain any kind of real “relationship” with her afterwards. These so-called professionals have been the CRIMINALS more often than not, the in the grand scheme of it all.
Yet – nobody gives a second fuck about it…because it is unbelievable right? It only happens to people on TV or in a different state than ours, right? Sadly, anyone you see in the news with similar stories is only even shown on the news because something irreversibly tragic and impossible to sweep under a carpet somewhere has happened to that person’s child(ren). I would love it if someone – ANYONE – could successfully show me any form of lasting justice in the Juvenile Court System, nationwide. I search and search these days for any documentation that sways an opinion in the direction of such a notion; one thought of Boo, and my blood starts to boil, naturally. Yes – Boo has FINALLY seen a small piece of the justice due after the Living Hell that she has been forced endure for the last SIX PLUS YEARS…but it’s hardly enough.
Notably, these crucial and trying years have been spent being forcibly separated from each other by the very same individuals and agencies that set Boo on top of the burner to begin with all that time ago. Notably, the tragic and disgustingly long line of events that have transpired as direct (and indirect) results of the Judge as well as the local DFCS’ initial fuck-ups through Failure to Protect/Failure to Act/Failure to Follow Procedure continues to be swept aside to all corners by every “professional” involved. Notably, anybody with any empowerment to have helped Boo receive said justice when it still might have meant something to her – as a child victim to a Pedophile on the county Payroll – has opted NOT to exercise such powers in the sake of a child’s fundamental human rights to be unmolested while under the COURT ORDERED “care” of an institution.